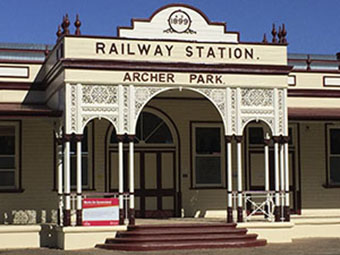 A crucial restoration and conservation project that has given Rockhampton’s landmark Archer Park Rail Museum a new lease on life has received special recognition at the coveted National Trust Queensland Heritage Awards.

Delivered by Australian Heritage Specialists (AHS) for Rockhampton Regional Council, the project received a High Commendation in the 2018 Agency Conservation Programs category at the state awards ceremony in Brisbane last night (May 31).

Urgent maintenance works on the 119-year-old building, which was formerly the Archer Park Railway Station, included a new roof, building repairs and external painting and were identified as part of a Council Conservation Management Plan prepared by AHS in 2016.

AHS Principal Consultant Benjamin Gall said the carefully-planned project had restored the building back to its former glory and ensured the popular museum would continue to be a drawcard for locals and tourists.

“We congratulate Rockhampton Regional Council on this fantastic result and are honoured to be recognised for the detailed planning and expertise that went into the restoration project,” Mr Gall said.

“Archer Park Railway Station is a key part of Queensland’s transport history and a significant heritage landmark for Rockhampton which still serves an important function within the community.

“It’s a great example of how a building of state heritage significance can not only be conserved but given an appropriate new use respectful of its history to ensure it has a future purpose.”

Built in 1899, Archer Park Railway Station was the central railway station for Rockhampton and a key component of the evolution of central Queensland’s railway network.

The station was closed in 1970 and used as a freight terminal until 1990, then later developed into a museum by the Council featuring the one-of-a-kind Purrey Steam Tram.

Mr Gall said the building had retained many original elements and the restoration work ensured its heritage values were conserved, including correcting the colour scheme that was the result of a previous restoration project carried out in the 1990s.

Oxfam trailwalkers given special welcome to country
Scroll to top